We connect and empower individuals, organizations and communities impacted by adoption and foster care, and we provide a source of healing for those in need.

An inclusive community supporting all people impacted by adoption and foster care.

Inclusiveness*: We draw strength from that which unites by embracing all people, honoring diversity and accepting differences.

Collaboration: We choose to be a catalyst for outstanding practices by fostering relationships internally and externally among individuals, organizations, and communities.

Courage: We stand for our mission and an individual’s right to self-determination even at the risk of compromising mainstream acceptance.

Trust: We promote a sense of security and hope through honesty, authenticity, and openness.

*Adoption Network Cleveland is fully committed to inclusiveness. Adoption touches people of all cultures, backgrounds, and walks of life. Throughout our organization, we celebrate this fact by:

Acknowledging and accepting our differences, we choose to draw our strength from that which unites us.

How do we accomplish our mission?

Adoption Network Cleveland was founded in 1988 by Betsie Norris, an adoptee, after she successfully searched for her birthparents and recognized the unmet needs of adoptees, birthparents and adoptive parents. Adoption was once seen as a simple legal event. For 30 years, Adoption Network Cleveland has offered programs and services that recognize adoption as a complex, lifelong and intergenerational journey with ongoing issues for all those whose lives are touched by it. Core programs and services include our Helpline, General Discussion Meetings, professional trainings, search assistance, a newsletter, pre- and post-adoption support and educational opportunities, advocacy and a speaker’s bureau. The organization promotes community awareness and social change by advocating for progressive policies in adoption practice, policy and law.

Adoption Network Cleveland was a fully volunteer organization until 1995, at which point the Board of Directors hired the founder, Betsie Norris as the Executive Director. With a small staff and budget, the organization has had a big impact and has a volunteer base of over 150. Our small but mighty nonprofit organization has impacted the lives of hundreds of thousands of individuals touched by adoption and foster care in the last 30 years; two major accomplishments deserve special note.

Adopt Cuyahoga’s Kids: In 2002, the Community Vision Council led by the United Way of Greater Cleveland identified the large backlog of 1,700 youth in foster care waiting for adoption in Cuyahoga County as a crisis that needed an immediate and well-coordinated solution. Chosen to serve as the lead agency for the Adopt Cuyahoga’s Kids Initiative, Adoption Network Cleveland led a the effort that transformed adoption in our community by redesigning the system for adoption of waiting youth in Cuyahoga County through an innovative public-private partnership. These systemic innovations were instrumental in reducing the number of youth available for adoption in Cuyahoga County from 1,700 in 2004 to fewer than 600 in 2019.

Through the Adopt Cuyahoga’s Kids Initiative, Adoption Network Cleveland has developed a comprehensive methodology to address multiple barriers to permanency for youth in need and has been successful on a far greater scale, providing a replicable model for other areas experiencing crises in the public child welfare system. In recognition of the success of the Adopt Cuyahoga’s Kids Initiative, Adoption Network Cleveland received a 2009 Adoption Excellence Award from the U.S. Department of Health and Human Services in the area of Adoption of Minority Children and Youth, one of many awards the organization has received.

Adoptee Access to Records: Twenty-five years of public policy advocacy were commemorated with a ROAR. Initiated by Adoption Network Cleveland, Ohio Senate Bill 23 was introduced in early 2013 and signed into law in December of that year. Adoption Network Cleveland’s campaign was branded Restore Ohio Adoptee’s Rights (ROAR in 2013!). As a result of this successful campaign, Ohio-born adoptees who were adopted between 1964 and 1996* gained access to their original birth certificates—impacting the lives of over 400,000 adult adoptees. Commemorating its 25th anniversary that year, this law represented Adoption Network Cleveland fulfilling its lifetime of advocacy on this issue as we had initiated bills in the 1980s, 1990s and 2000s that had faced significant opposition. SB 23 sailed through with little opposition due to progress made over the years. Watch the video highlights.

In 2015 on March 20th SB 23 was fully enacted. It allows all adoptees from the previously closed records era to access their original birth certificates. Adoption Network Cleveland celebrated for two days in Columbus with hundreds of Ohio-born adoptees, many of whom traveled across the country to attend. See a series of short films. Prior to “Opening Day” Adoption Network Cleveland partnered with Jean Strauss and the Ohio Department of Health for the creation of another documentary entitled Walking Through Ohio’s Adoption Records Law. As of November 2018, 12,500 adult adoptees had obtained their original birth certificates.

*Birth certificates of Ohio-born adoptees adopted prior to 1964 have always been accessible to the adoptee. In 1996 a bill passed that created virtually unfettered access to birth certificates for adoptees in adoptions from September 18, 1996 forward.

With the celebration of the 30th Anniversary in 2018, Adoption Network Cleveland reviewed the scope, name and brand of the organization. Out of this process The Ohio Family Connection was added to our name as a tagline representing the expanding populations we now serve and our services were categorized into four hubs: Family, Adult Adoptee and Birthparent, Foster Youth and Alumni, and Professional and Stakeholder. Each hub continues to be served with the underpinnings of advocacy, education and support.

View a complete timeline of our history, advocacy efforts and accomplishments. 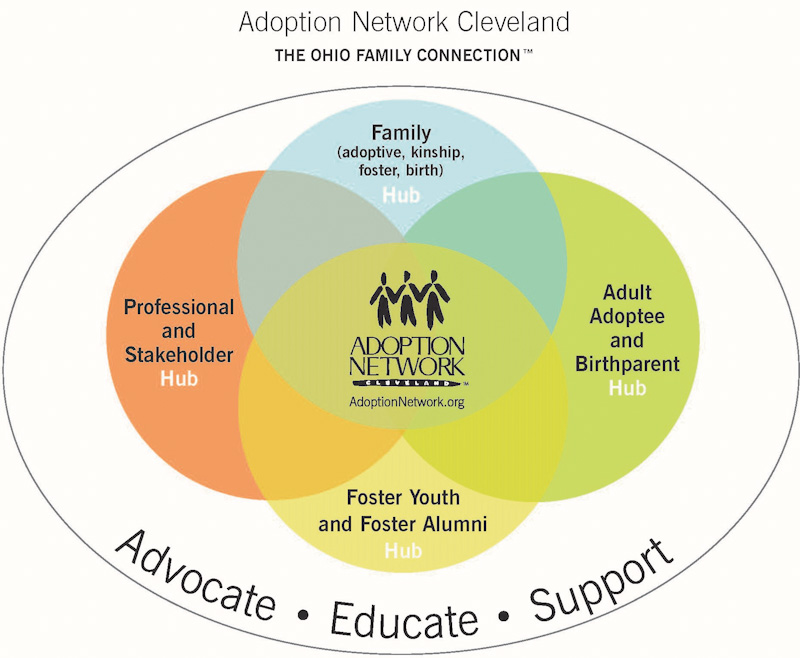