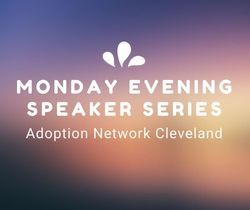 Participants of this Monday Evening Speaker Series are invited to a special screening of the documentary, "From A Place Of Love," followed by a question and answer session with the film's director David Bynum. With the age of 60 on the horizon filmmaker David Bynum set out on a journey of discovery to find his biological family. After 58 years of not knowing where his true roots were or any family history, the need to search became overpowering and prompted him to begin his journey. In “From A Place Of Love” you will accompany David on his quest to find the answers to the questions he had been carrying with him his whole life. The Film is told by the people who assisted him along the way.

David Bynum was born and adopted at birth in Columbus, Oh. He began his search two years ago and is currently in reunion with both sides of his biological family. He is a married father of three and grandfather of six. He is a U.S. Army Veteran and Retired Correctional Officer and a High School Football Coach at Reynoldsburg High School. David and his wife Marie own ByDam Multimedia, which is the parent company to Star107fm.com an online radio station that has a global presence. His company recently produced his latest release, “From A Place Of Love” – My Adoption Journey. David enjoys traveling, boating, fishing, and spending time with family.