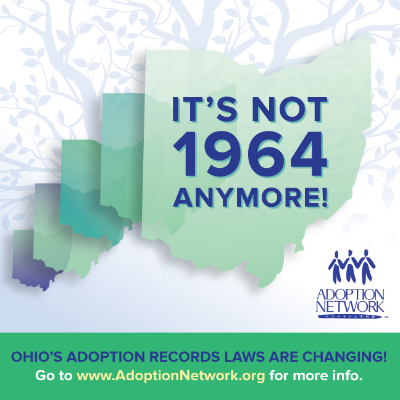 This area serves as a historic archive of Senate Bill 23/House Bill 61, championed by Adoption Network Cleveland, (the bill was sponsored by Senators Beagle and Burke and Representatives Pelanda and Antonio). The legislation passed in 2013, creating access to records for 400,000 Ohio adoptees beginning in 2015.

For over 25 years, Adoption Network Cleveland was the primary advocate for legislation in this area. Between 1988 and 2013 we developed and advocated for this legislation repeatedly.

In 2013 we succeeded when SB 23/HB 61 became law. This new law, implemented March 20, 2015, grants 400,000 adult adoptees adopted between 1964 and 1996 access to their original birth certificates. This important legislation was the result of hard work by many people over several years. Adoption Network Cleveland Executive Director Betsie Norris began this advocacy work in 1988 when she founded the organization and followed it through to its success.

The content of SB 23 and HB 61 was identical in language, and the effort on both bills resulted in SB 23 passing and becoming law.

To continually inform SB 23/HB 61 supporters of the legislation's progress, Adoption Network Cleveland sent out email correspondence with the latest updates and ideas for action. Those emails are preserved below in their original language.

For historical purposes, a four-page preliminary implementation report, published on April 1, 2014, is available.