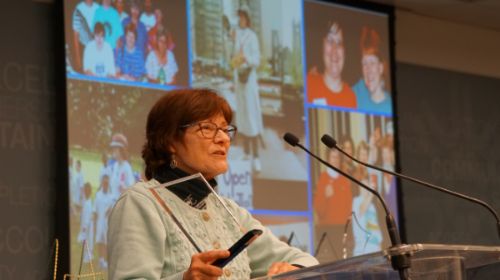 Adoption Network Cleveland has numerous deserving volunteers, which makes it challenging to narrow it down to one each year. However, as Adoption Network Cleveland reflected on 30 years of service to our community, knowing that it would have been impossible to come this far without the support of volunteers, one person stood out. This individual has been a part of the Network since the very beginning, and is deserving of our 30th Anniversary Founder's Award.

This year's recipient for the Founder's Award is Dottie Klemm, as she embodies action for all of our 30 years.

Dottie has been an instrumental part of Adoption Network Cleveland's work. She has been a day-to-day volunteer, was a founding steering committee and board member, a staff member, a program creator and so much more. Dottie's knowledge and expertise has been and continues to be invaluable.

Dottie has played the part of an important liaison to the professional community, especially in our early days when social workers might have viewed our mission with some skepticism. In her career as Post Adoption Supervisor, then Administrator of Adoptions for Cuyahoga County Division of Children and Family Services (CCDCFS) her deep involvement built many bridges. For 10 years Dottie and Betsie Norris, Executive Director and Founder of Adoption Network Cleveland, co-facilitated all of our monthly General Discussion Meetings (about four to five a month), and after Betsie gave birth to her son in the late 1990s, Dottie helped restructure the role to support volunteer teams at each location.

After retiring, Dottie was a key player helping to design, create and implement the Adopt Cuyahoga's Kids Initiative — even joining our staff for several years to develop and manage our Permanency Navigator program.

"The Navigator Program allowed me to step away from being a CCDCFS agency employee into seeing the family perspective," Dottie said. Since retiring from that role, Dottie has continued volunteering to co-facilitate the Heights General Meeting, and has been involved in our Search program.

Betsie recalls Dottie missing her first weekend of classes as a graduate student at Case Western Reserve University to attend an American Adoption Congress Regional Conference hosted by Adoption Network Cleveland — our founding conference in 1988. As the worker at CCDCFS with the duty to fulfill requests by adult adoptees for background information, Dottie, always passionate about her work, was looking for resources as well as evaluating if we were "reputable".

It is not uncommon for Dottie to come up in many stories in the 30-year history of Adoption Network: from line dancing to office tasks, Dottie is there to help.

Through volunteering, Dottie continues to guide, support, and mentor others. Her countless hours as a volunteer, and as a staff member, over the past 30 years have exemplified commitment and devotion to the work and mission of Adoption Network Cleveland.

"I have learned so much more than I have given," she said.

Evan Caroline Clark is the Volunteer and Outreach Coordinator at Adoption Network Cleveland.