Our participation in Lobby Day 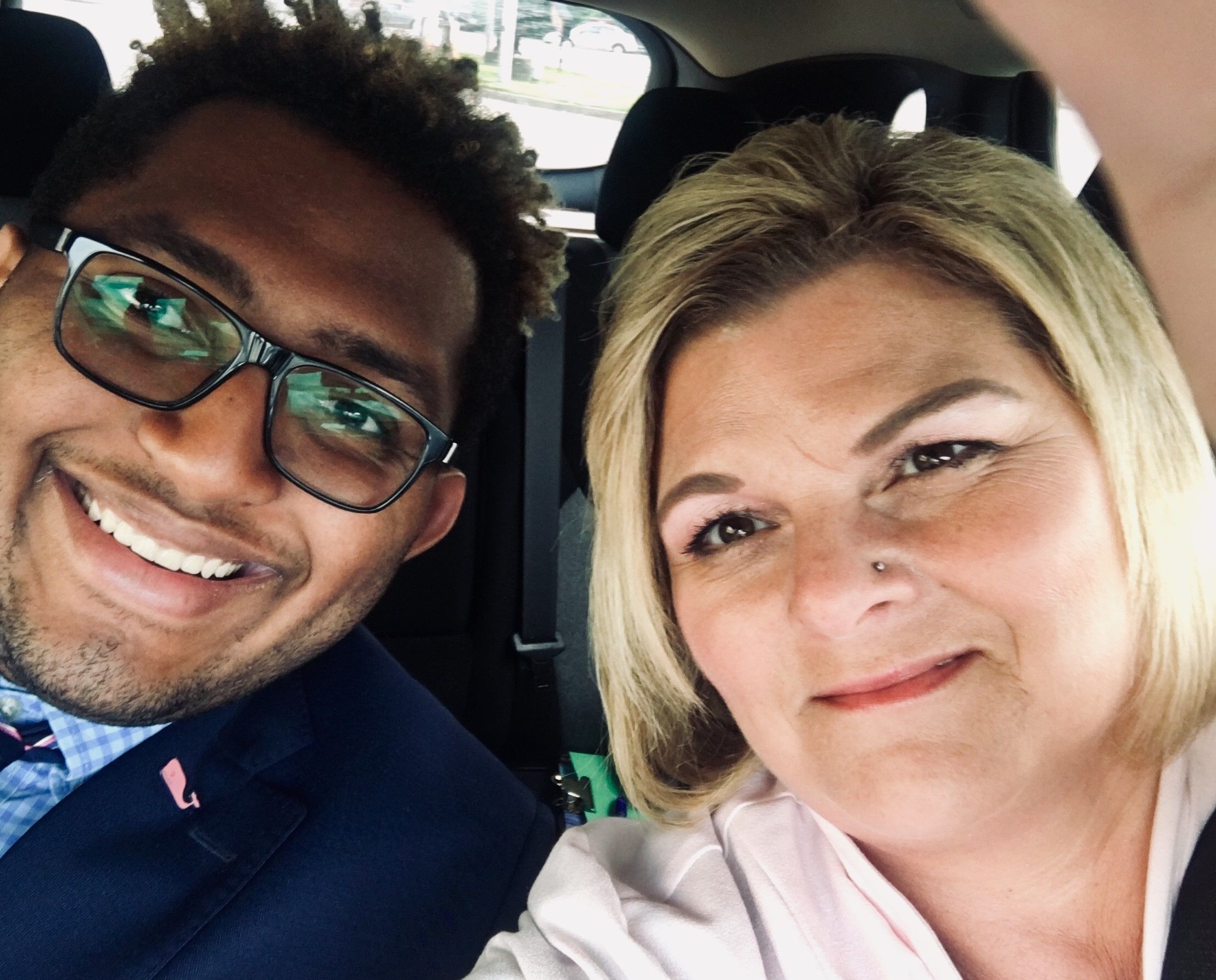 On May 8, 2019, Adoption Network Cleveland held our annual Lobby Day, visiting Ohio representatives and senators advocating for our public policy agenda, delivering materials and giving gifts of candy jars. Board member Stephanie Lariccia and her son Justice participated as volunteers for Lobby Day, and share their experience visiting Ohio Legislators below. The views expressed are the views of the authors. Adoption Network Cleveland does not endorse a specific viewpoint on political parties or abortion, and holds firm to our value of inclusion – embracing all people, honoring diversity and accepting differences.

I was 36 years old when I voted for the first time.

I’m still pretty embarrassed to admit that, but I grew up having formed the belief that politicians cared nothing about the concerns of everyday people like myself. Their families didn’t look like my transracial adoptive family. They didn’t work multiple jobs like my husband and I routinely have in order to pay for therapy and tutors. Their privileged children didn’t struggle to believe they could be whatever they wanted to be when they grew up. The world and the circles politicians traveled in were nothing like my real world experiences.

But all that changed in March of 2007, when I did something out of character and convinced my family to go hear a Democratic Presidential candidate speak at a rally in Cleveland. My husband and young son knew well my disdain for politics, yet found it interesting that I’d become captivated by a man named Barack Obama.

That afternoon, my view of politicians that had formed over three-plus decades was obliterated in an hour. With a large blue and red hand-painted sign that read OBAMA ROCKS! hung prominently in a gym stuffed with some 1,700 people, Obama took everything I had believed about government and politicians and promptly turned it upside down. I was struck by the diverse crowd as the junior senator from Illinois shared a desire to aid hardworking, middle-class families like mine. Obama was eloquent and charming – and yet somehow also incredibly down to earth. He made me feel like he cared. He made me feel like my family mattered. The fact that he was African-American also made me believe that if he could become President of the United States, I could, for the first time, honestly tell my brown-skinned, then-7-year-old son he could grow up and be anything he wanted.

We left Cuyahoga Community College’s Eastern Campus that day – Obama’s first rally in Ohio – with hearts changed and minds wide open. After that day, I registered to vote and we regularly began donating to Obama’s campaign. Witnessing my example, my young son asked that I take $20 from his piggy bank to donate to Obama’s campaign because he too wanted to be a part of history. We proudly staked Obama campaign signs in our yard and the yards of neighbors after knocking on doors and spreading the word. We helped get potential voters registered, made pre-election phone calls and even helped drive local folks to the polls who otherwise couldn’t get there themselves. Then I voted for the first time. Obama’s history-making presidency not only transformed this middle-aged Mom, but more importantly, it profoundly shaped the way my now 18-year-old son sees himself and the impact he has on the world around him. Instead of grousing about politicians being out of touch, Justice thinks: “What can be done?” And then he asks: “How I help make change?”

It is with this background that I became involved with Adoption Network, joining the organization’s Public Policy Committee and then proudly becoming a board member. As an adoptive mother, I believe wholeheartedly in the organization’s mission. Not long ago, I asked my son if he too would like to be involved in political activism with Adoption Network. Without hesitation, he volunteered to use his voice and his experience as an adoptee in an open and transracial adoption, to help lobby Ohio politicians on behalf of Adoption Network Cleveland: The Ohio Family Connection. “I know adoption is beautiful,” he said. “But it’s not easy. Whatever I can do to help make life easier for other adoptees like me, I will.”

I had never heard of Lobby Day previously, but I could tell that joining my mom to assist Adoption Network carry out its annual lobbying kick-off could be a fun and memorable experience. The fact that participating also got me out of my high school classes like British literature and statistics for a day, certainly didn’t hurt either. However, little did I know a few months ago the incredible impact that participating in Lobby Day on May 8 would have on me personally.

We began a couple weeks earlier by carefully placing decorative and informative labels on more than 100 glass jars, then filling them with chocolate candy and loading them in boxes in the back of our Jeep. On the morning of May 8, my mom and I awoke at 5 am and soon after began our commute to the state capitol in Columbus as a part of a team of volunteers who would deliver the candy jars to Ohio’s State Representatives and Senators.

During the two-hour commute, my mom drove while I used my phone to research facts and made notes about the list of seven representatives (a mix of Democrats and Republicans) that we’d been assigned to meet. Although I was initially looking to see if they had any personal ties to or had previously supported adoption and/or foster care-related issues, I was excited to find other tidbits of information about them that I could use to help make a personal connection with them – such as my interest in becoming a pilot and some of their backgrounds in aviation.

Once we arrived, we divided into nine teams and split up to visit over 100 offices in total. Although we had called ahead and made appointments, my team mostly ended up meeting with the representative’s aides, as last-minute, important bill meetings had pulled all but two of our assigned representatives out of the office. Still, we shared with whomever would listen our personal experiences as members of the adoption constellation, as well as educated them on Adoption Network’s background, history and mission.

We talked about the staggering statistics of child welfare funding in Ohio, the hopeful creation of a foster care ombudsman, the importance of sibling connections, and shared our thoughts regarding a bill to increase Ohio’s Adoption Tax Credit. In short, we had about 15 minutes per meeting through the morning and early afternoon to present Adoption Network as a valuable resource to the legislators and their staff.

Little did I know, my mind would be opened as much as anyone’s that day after meeting with Democratic Representative Lisa Sobecki. Sobecki, whose House District 45 is in the Toledo area, wasn’t on my team’s original list. Because she was a late, mid-day addition, I didn’t have any research completed on her. So while waiting in the lobby for another meeting, I quickly googled her name.

My heart felt like it froze for a couple of seconds before my mom noticed and asked if something was wrong. I handed her my phone to show her a recent newspaper article about Representative Sobecki sharing her personal story of having chosen to undergo an abortion after being raped in her 20’s as testimony against the controversial anti-abortion “Heartbeat Bill” that had just been passed by Ohio’s lawmakers. I can imagine that reading the story might feel like a gut punch to many people. But for me, it hit home in an incredibly personal way that I wasn’t prepared for, as I had been created via rape. However, instead of being aborted, I was placed for adoption. As a result, I lean very heavily pro-life in this hot political debate.

When the time soon came to meet Representative Sobecki, we were surprised that not only was she available, she came out to the lobby herself to usher us into her office. While she led the way, my mom looked at me with a stern face and mouthed the words “Do not mention the word abortion. Remember why we’re here.”

Representative Sobecki quickly proved to be warm and bubbly, talkative and pragmatic. She listened politely, asked questions and shared with us a personal story about a nephew who had been adopted out of foster care. When she asked me about my story, I shared that I was part of an open adoption and lucky to often visit and spend time with my birthmom – and left it at that. If we would have not had a meeting with another representative scheduled afterwards, we likely would have stayed a little longer to talk more about adoption, baseball and the Navy. Representative Sobecki seemed as interested in my mom and me as we were in her.

Just as we began to excuse ourselves, she jumped up from behind her desk and asked my mom and me if we would do her the honor of taking a picture with her. Before we could even think of politely declining, she handed her cell phone to her aide and stood between my mom and me, leaning in and smiling wide.

That’s when it dawned on me that just like the impact Barack Obama had on re-shaping my adoptive mom’s point of view on politicians, Representative Sobecki had given me something to think about regarding my hardline stance against abortion. When I agreed to volunteer for Lobby Day, I did so with the intention of helping others by sharing my knowledge on adoption. Yet, I may have left Columbus with the biggest take away of the day: politics may often divide us, but relationships have the power to bring us together regardless of our fundamental differences.

After we’d all made our way back home to Northeast Ohio, Adoption Network Founder and Executive Director Betsie Norris succinctly summed up the day’s experience the best: “Scores of powerful conversations were had, connections made, minds opened, and information imparted.” Within days Adoption Network was already getting follow-up calls from offices seeking to implement some of our ideas.