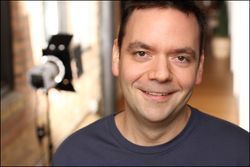 Kevin will share his personal story as a late discovery adoptee, and how he used creative outlets to promote his own healing. More info to come!

About Kevin Gladish
Kevin is thrilled to be part of the Monday Speaker Series. Kevin has performed as a live storyteller in Chicago at several venues over the years, including on the Steppenwolf stage and in The Moth, where he participated in the Grand Slam. He's written for a number of adoption-related platforms, most recently for Portrait of an Adoption, and was featured on the Bloods Call Podcast. Shortly after Kevin discovered his adoption by asking for his newly-released Ohio birth certificate in 2015, he began writing a blog called A Story With No Beginning which documented his discovery, his search for birth family, and his struggle with his new identity as it all happened. The blog was recently adapted into a solo performance piece which Kevin debuted at the Virtual Filet of Solo with Lifeline Theater in Chicago this year. The show is called A Secret in Plain Sight.